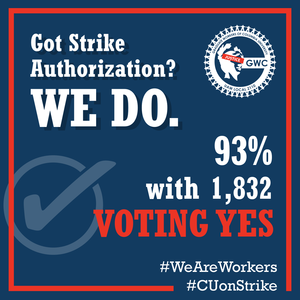 After over three years of legal delays by the Columbia University administration, a majority of 3,000 research and teaching assistants have voted 93% (1832 to 136) to authorize their bargaining committee to call a strike. This follows Columbia’s announcement that they will defy their legal obligation to bargain and refuse to recognize the union.

On December 16, 2017, the National Labor Relations Board rejected Columbia’s attempt to nullify a December 2016 vote, where research and teaching assistants voted in favor of unionization 1602 to 623, and certified Graduate Workers of Columbia-UAW (GWC-UAW) as their union.

A strike deadline has been set for Tuesday, April 24, with a strike to commence unless Columbia agrees to bargain.

Picketing will take place on: