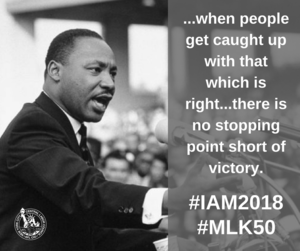 On Wednesday, April 4, the Labor Movement across New York City and the United States paid respect to the life & legacy of Dr. Martin Luther King, Jr.

50 years ago Dr. King was assassinated while in Memphis, Tennessee as he stood with the sanitation workers who went on strike after two of their brothers were killed on the job.

Labor Leaders and civil rights activists gathered this week in Memphis to commemorate the 50th anniversary of the death of Dr. King and the strike.

Dr. King seamlessly entwined civil rights and labor rights and galvanized a movement that would work to continue his efforts long after his life was taken.