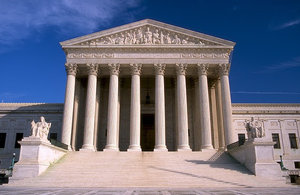 Employers who stiff their workers or discriminate against them just got a big lift from the Supreme Court, which issued a major ruling Monday making it easier for companies to avoid employee lawsuits. The 5-4 ruling upheld employers’ use of class-action waivers in arbitration agreements. By signing these controversial provisions, workers give up their right to band together and sue in court for back pay or damages, and are instead forced to take their disputes to arbitrators individually.

"Today, five justices on the Supreme Court decided that it is acceptable for working people to have our legal rights taken away by corporations in order to keep our jobs,"  said AFL-CIO President Richard Trumka. "This decision forcing workers to sign away the right to file class-action suits against such illegal employment practices as wage theft, sexual harassment and discrimination is outrageous—and it is wrong. In this case, the newest justice has joined the dangerous trend of this court to side with corporations over working people. We call upon Congress to immediately enact legislation making clear that no worker can be forced to give up their right to effectively challenge illegal conduct in the workplace in order to keep their job." Read more about the decision here.