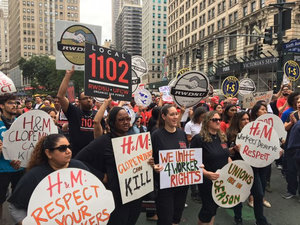 On Wednesday, with an expired contract, 1,500 unionized H&M workers at locations across Manhattan ramped up their campaign for a fair new contract. After months of negotiations, it was clear to the union that the company was not bargaining with any real intent to secure a new contract. A number of elected officials joined H&M retail professionals, who are members of Local 1102 of the Retail, Wholesale and Department Store Union (RWDSU), at the Herald Square Flagship location – the largest H&M store in the world, to rally for essential scheduling provisions that would eliminate “clopenings”, give part-time workers a minimum of 14-18 hours a week and the right to time off after five consecutive days worked, among many other fair union demands.

“Our members used to be proud to work for H&M, but their utter disregard for their workers, which we’ve seen deteriorate over months of negotiations tells a different story. Forcing low-wage workers into a schedule that can only provide poverty level wages with no ability to work a needed second job is disgusting. We cannot stand for it, we will not stand for it, and we will fight until we secure a fair new contract for the over 1,500 workers we represent at H&M,” said Alvin Ramnarain, President of Local 1102 of the RWDSU. Read more.