Get Out the Vote and Get Involved! 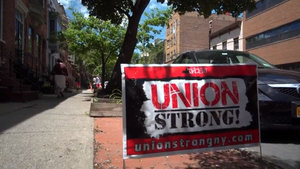 From the New York State AFL-CIO: A year ago New York union members led the way to the most impressive political victory in the history of this state – the defeat of the Constitutional Convention. Despite being down 40 points in the polls, Labor won on election day with an astonishing 83% of the vote. These days, it’s hard to get 83% of people to agree on anything, let alone an Election, but we did it - together. Another important Election Day is coming, and we need your help once again.

It’s critical that you get out there and speak with your union brothers and sisters by participating in labor to labor, grassroots actions. As we showed with the Constitutional Convention, New York is union strong and it makes all the difference in the world.

Enter your zip code to find grassroots events near you.