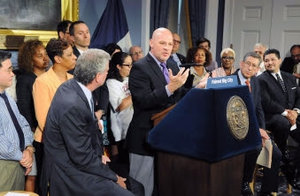 After months of intense negotiations and a public campaign by UFT members, the union and the Department of Education have reached an agreement that will provide paid parental leave for New York City public school educators.

The policy, which will take effect on Sept. 4, 2018, provides six weeks of time off at full salary for maternity, paternity, adoption and foster care leave. When combined with current sick leave provisions, the new policy will allow mothers to take up to 12 to 14 weeks of paid leave after giving birth. Read more.