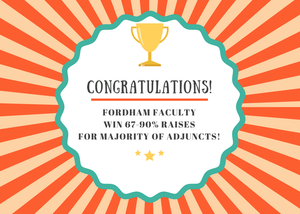 The members of Fordham Faculty United/SEIU Local 200United, the union of more than 800 Fordham University adjunct and full-time, non-tenure-track faculty, voted overwhelmingly to ratify their first collective bargaining agreement with the Fordham administration. The vote came after a record-setting four months of bargaining and just seven months after non-tenure track faculty voted 16-to-1 to unionize. The new three-year contract secures wage increases that rank among the highest ever won in a first contract by the more than 50,000 non-tenure track faculty affiliated with SEIU. For most adjunct faculty, pay will rise between 67% to 90%, with a majority of adjuncts receiving between $7,000 to $8,000 per course by the third year of the contract, depending on how long they have taught at Fordham. The contract sets a new minimum annual salary of $64,000 by the third year of the contract for full-time, non-tenure-track faculty with full course loads, an increase of roughly $14,000 for some of the lowest paid full-timers at Fordham. Read more.