Supreme Court Nominee Brett Kavanaugh: A Threat To the Rights of Working People 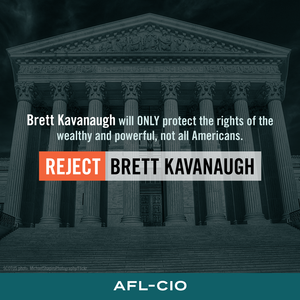 Last week, President Trump nominated Judge Brett Kavanaugh to become an Associate Justice of the Supreme Court of the United States. The New York City Central Labor Council AFL-CIO, along with labor federations and unions across the country, stands in opposition to Judge Kavanaugh's nomination. Judge Kavanaugh has a dangerous track record of protecting the privileges of the wealthy and powerful at the expense of working people. He routinely rules against working families, rejects employees' rights to receive employer-provided health care, sides with employers in denying employees relief from discrimination in the workplace, and promotes overturning established U.S. Supreme Court precedent.

Decisions by the Court, often by the narrowest of margins, have a dramatic impact on our lives—as we recently saw in Janus—and reinforce the importance of choosing who sits on the Court. The next Justice confirmed to a lifetime appointment on the Court will play a pivotal role in new cases addressing voting rights issues, worker safety issues and collective bargaining rights for generations to come. The stakes are too high—we cannot have another Justice who sides with corporations over America’s working families. The Senate should reject this nomination and demand a nominee who will protect the rights of working people and uphold our constitutional values of liberty, equality and justice for all. Take action now to tell the Senate to reject Brett Kavanaugh!