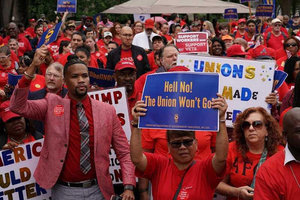 A federal district judge in Washington on Saturday struck down most of the key provisions of three executive orders that President Trump signed in late May that would have made it easier to fire federal employees.

The executive orders, which also rolled back the power of the unions that represent federal workers, had instructed agencies to seek to reduce the amount of time in which underperforming employees are allowed to demonstrate improvement before facing termination, from a maximum of up to 120 days to a maximum of 30 days, and to seek to limit workers’ avenues for appealing performance evaluations. The orders also sought to significantly reduce the amount of so-called official time that federal employees in union positions can spend on union business during work hours.

"We are heartened by the judge’s ruling and by the huge outpouring of support shown to federal workers by lawmakers from both parties, fellow union workers and compassionate citizens across the country," said AFGE National President J. David Cox Sr. "Our members go to work every single day to serve the American people, and they deserve all the rights and protections afforded to them by our Founding Fathers."