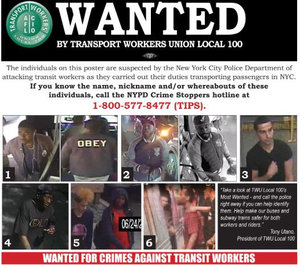 TWU Local 100 this week began distributing Most Wanted posters along the A line urging riders to identify a man who repeatedly punched a subway conductor Saturday morning at the Grant Ave. station in Brooklyn. The attack, which took place at approximately 4:40 a.m., was videotaped by at least one bystander and posted on Facebook. The Conductor, who suffered a black eye and scratches to his face and arms, had announced that the train was going express, and stopped at the Grant Ave. station when suddenly the man appeared at his window. “This young gentlemen came up on me yelling and screaming, and before I could say anything he was throwing punches at me,” the Conductor said.

“If you attack one of our members, we are going to do everything in our power to make sure you are identified, arrested and prosecuted,” Local 100 President Tony Utano said. “We’re fighting back against these criminals.” Click here to read more and download/print the poster.