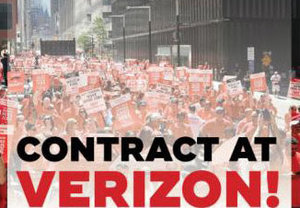 Verizon workers represented by the Communications Workers of America (CWA) in the Northeast and Mid-Atlantic regions and at Verizon Connected Solutions voted last Friday to ratify a four year extension of their current contracts, which were set to expire in August 2019.

The extensions provide for additional wage increases and enhanced retirement benefits. The agreement, which extends the contracts through August 5, 2023, will deliver an 11.2% wage increase over the additional four years and covers over 34,000 Verizon workers, including call center workers, and central office and field technicians.

"This agreement builds on the success of the 2016 strike, and it will ensure a better future and good, family-supporting jobs for thousands of Verizon workers," said CWA District 1 Vice President Dennis Trainor. "This agreement reflects the more constructive relationship between CWA and Verizon that has developed since the strike." Read more.