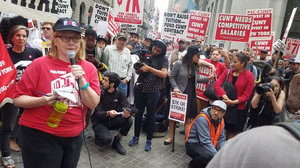 More than 500 PSC-CUNY members and supporters gathered last night in front of the NY Stock Exchange and marched to the investment banking firm of CUNY Board chairperson William Thompson to demand investment in a contract for the PSC, and to protest continuing austerity at CUNY.

PSC-CUNY members are telling Wall St it's time to pay its share and time for the CUNY trustees, led by Thompson, to demand public funding for their contract and for quality CUNY education. Wall Street posted $25 billion in profits last year, while CUNY students got tuition hikes, exploited professors, and crumbling buildings. The union is also making it clear that Albany's practice of not funding new contracts and leaving agencies to fund the raises out of existing budgets is unacceptable. CUNY must not be forced to cannibalize academic programs to fund a contract, and existing agreements, such as the teaching load reduction, must be funded. The next formal bargaining session is scheduled for October 4. Keep up with PSC-CUNY's fight on Twitter and Facebook, and at www.psc-cuny.org. #CUNYCONTRACTNOW #FairPay4All #7KCUNY