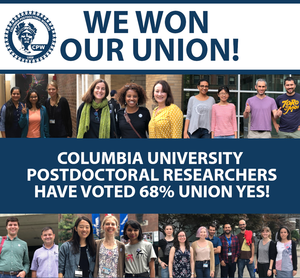 In a National Labor Relations Board election held Oct. 2 and 3, the vote to unionize with the UAW passed by a significant margin of 68%. The 2,000 postdocs and associate research scientists now look to begin bargaining for what would be the first union contract covering postdocs at a private university.

Postdocs and associate research scientists are researchers who have earned a Ph.D. and typically work under the supervision of a faculty member on a variety of research projects, such as on major diseases like AIDS and Alzheimer’s, climate change, new technologies and other critical areas. As the core of the research workforce on campus, their work helps bring an estimated $1 billion in research grants and contracts to Columbia annually, helping to heighten the university’s reputation as a world-class research institution and to boost the local economy.

Including today’s vote, more than 17,000 graduate student workers, contingent faculty and postdocs across the Northeastern United States have chosen UAW representation in the last five years alone, a growth trend that is fueling progress on key worker issues across multiple campuses. Read more.