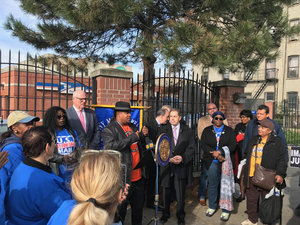 Postal Workers, members of Congress, and allies gathered at the Hunts Point Post Office on Tuesday to call for the immediate reinstatement of posting banking services and explain why it's a winning proposal for all stakeholders: the U.S. Postal Service and the government, consumers, and postal workers.

Prior to the event, Bronx Representatives Serrano, Engel, Crowley, and Espaillat sent a letter to the United States Postmaster General, Megan J. Brennan, to encourage the U.S. Postal Service to renew the provision of banking services inside postal banks. Reps Serrano and Crowley joined the postal workers and supporters on Tuesday. Advocates also attempted to deliver more than 5,000 signatures from Bronx residents calling for USPS to provide affordable financial services, but the Postmaster refused to accept the petitions.

“Residents of the Bronx need affordable banking services – and the women and men of the U.S. Postal Service are ready to deliver," said Jonathan Smith, president of the New York Metro Area Postal Union. "Consumers without access to banking services are paying thousands of dollars a year to alternative financial institutions. The U.S. Postal Service has the legal authority, and the capacity, to provide a range of financial services at a much more affordable cost. Affordable financials services, available in public post offices across the country, would be a great benefit to working families,” said Smith. “That’s especially true here in the Bronx, where half the population either does not have a bank account, or is using alternative financial institutions, often at great expense.” Read more about the campaign for postal banking here.