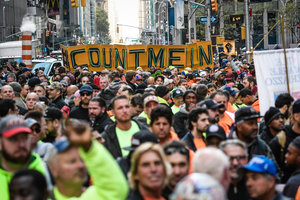 “New York City is a union town,” they chanted — thousands of voices reverberating off of office buildings and down the upper Manhattan street on Tuesday afternoon. They donned green, carried banners and marched from 6th Avenue and 50th Street to Columbus Circle, determined to make their grievances heard. This was how thousands of union construction workers marked the one year anniversary of #CountMeIn, a rank and file movement grounded in the fight against the developer Related Companies. Read more from The Indypendent here, and check out photos in #CountMeIn's Facebook album!