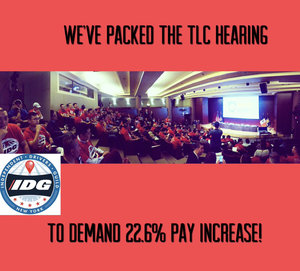 After a two year campaign by the Independent Drivers Guild, New York’s Taxi and Limousine Commission held a hearing on Wednesday on the nation’s first livable wage rules for drivers for apps like Uber and Lyft. The city’s proposed rules, put forward following the Guild’s campaign and regulatory petition, would mean a 22.5% raise for drivers, a pay increase if Uber and Lyft over-hire, and annual cost of living increases.

The proposed pay structure is a vital and revolutionary move toward regulating the app-based industry to make it more fair for working people. However, the Guild found that the city’s proposal underestimates driver costs in several areas, most dramatically in the areas of vehicle lease and rental costs and in the cost of benefits. The IDG, which represents more than 65,000 app-based drivers in New York City, is calling for the Commission to fix the cost estimates in light of this new data and then pass the amended rules swiftly. Read more.