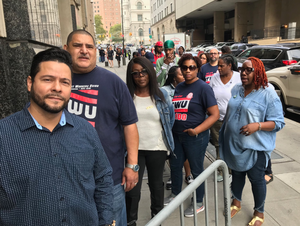 TWU Local 100 packed a Brooklyn courtroom for the arraignment of a man who sprayed a mace-like liquid at a B15 Bus Operator and then released pepper spray on another B15 bus hours later. Brooklyn Supreme Court Justice Martin Murphy took notice of the large Local 100 contingent in his courtroom Thursday morning.

“We have a full audience here today, mostly from the Transport Workers Union,” Murphy noted. He then refused to lower Andrew Chandler’s $30,000 cash or bond bail.

“I don’t have any sympathy for anybody that attacks a transit worker,” said Local 100 President Tony Utano. “We come here to do a job and go home safe to our family. We don’t come here to do a job and go to the hospital.” Utano said Local 100 would press the NYPD to pay attention to buses and provide a police presence to serve as a deterrent. Local 100 also will continue to distribute its Most Wanted posters, he said. “If you assault a transit worker, we’re coming after you,” Utano said. Read more.

Save the Date: 2021 Climate Jobs and Just Transition Summit