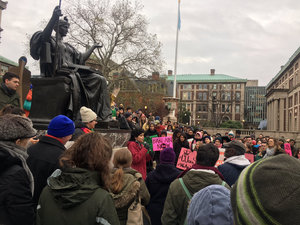 With a strike deadline looming and on the heels of a decisive postdoctoral researcher vote in favor of unionization last month, the Graduate Workers of Columbia-UAW (GWC-UAW) and Columbia Postdoctoral Workers-UAW (CPW-UAW) have made history by approving a framework agreement with Columbia University that includes union recognition for all 5,000 workers, withdrawal of Columbia’s legal challenge at the National Labor Relations Board (NLRB) and the commencement of bargaining in February 2019 towards initial contracts.

“We are proud that our preparation for further strike action led Columbia to finally recognize our unions,” said Rosalie Ray, PhD Candidate and graduate worker in Urban Planning. Rosalie Ray is a member of the GWC-UAW bargaining committee. “Columbia has opposed bargaining with research assistants and teaching assistants for more than 17 years.”

After a one-week strike last spring, graduate student teaching and research assistants (GWC-UAW) had planned to strike on December 4 if Columbia continued its years-long refusal to bargain. In the meantime, after postdoctoral researchers voted by a 68 percent margin to unionize in an early October NLRB election, Columbia filed a request for review with the NLRB, challenging the right of both groups to unionize.

This week’s vote marked a historic shift in that Columbia will now join nine other private universities by respecting graduate student workers’ union rights and will bargain with the first-ever postdoc union at a private university. Read the full text of the agreement here.