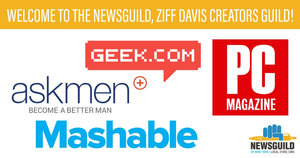 The journalists at Mashable and PCMag have joined the wave of digital news outlets aiming to become union shops. Staffers at the tech and culture sites sent a delegation to management on Thursday morning asking that their owner, New York-based digital media company Ziff Davis, recognize their union with the NewsGuild of New York and begin bargaining toward a first contract.

More than 80 percent of workers in the unit have signed union cards, according to the union. The union intends to represent around 40 Mashable employees and another 28 or so at PCMag, as well as a staffer apiece at two other sites, AskMen.com and Geek.com. Employees are calling their union the Ziff Davis Creators Guild. Read more here.