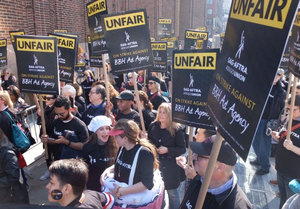 More than 400 SAG-AFTRA members rallied yesterday in front of ad agency Bartle Bogle Hegarty, LLC (BBH), which is trying to illegally abandon its union contract after almost 20 years. The rally took the form of a mock bake sale to raise funds for BBH. Thousands of baked goods were handed out.

“BBH complains that paying performers a living wage is just too expensive and they don’t have enough dough to pay us, so we’re helping them out with some dough of our own,” said SAG-AFTRA Executive Vice President and NY Local President Rebecca Damon. “All kidding aside, this is serious business. In a time when corporations are willing to devalue people's work and their worth, SAG-AFTRA and our allies are here to take a stand. That’s why we’re here. That's why we're standing strong. And that’s why we we’re not giving up.”