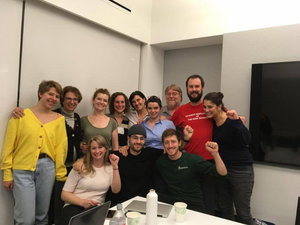 After more than 60 bargaining sessions, Student Employees at the New School (SENS-UAW) this week announced that their bargaining committee and the New School administration have reached a tentative agreement on a contract. Highlights include wage increases, a full waiver of the University Services Fee for any academic student worker working at least 5 hours per week, a health insurance rebate, and a commitment by the University to work with the SENS-UAW labor committee on a framework for providing childcare support. The Bargaining Committee, which had set a strike deadline for November 26th, has unanimously recommended this contract to the membership, and the student employees will vote on ratification next week. Follow SENS-UAW on Facebook and Twitter!