Starbucks: Stop Ignoring Farm Workers - and the Rest of Us! 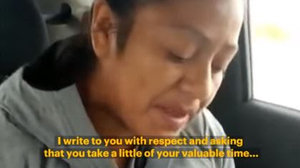 Josefina Luciano took a hoof to her mouth while working at a Darigold member dairy. The kick broke her jaw, knocked out eleven teeth and left her unconscious. Her desperate co-workers called 911, but didn't know the address of the dairy. Josefina said she almost drowned in her own blood.

On September 20th, Josefina joined a delegation of dairy workers and their supporters who went to Starbucks headquarters to demand action. A year after her debilitating injury, Josefina still has not been able to return to work, or to get the proper medical attention. She hasn't been able to get her full benefits because she believes her employer falsely claimed she was a new part-time employee -- despite the tremendous hours she worked. She went to the Seattle Starbucks headquarters to share her story and to call on the company to take action to address similar injustices happening to dairy workers at other Darigold member dairies. Starbucks is a major buyer of milk from Darigold member dairies.

When Starbucks did not want to listen, Josefina told their representative, "If you do not want to listen to me, then look at me please." She pulled her lips back and showed her 11 missing teeth. After that, she told her story. Josefina followed up her visit to the company with a letter to Starbucks CEO Kevin Johnson. To date, Josefina has not received a response.

Starbucks has not only ignored Josefina. They have refused to respond to many organizations who have reached out directly to Starbucks CEO Johnson. Enough stalling. It's time for Starbucks to break their silence and act on their published values. Click here to send an email calling on Starbucks to start working with the UFW and ensure that dairy workers employed at Darigold member dairies receive the fair treatment they deserve.