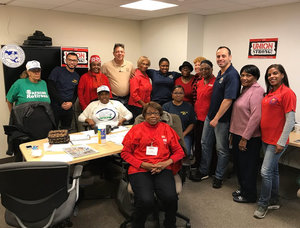 This Tuesday, union members across the nation turned out in droves to vote for candidates that have committed to standing with working families. Here in New York, NYS AFL-CIO-endorsed candidates overwhelmingly won their Congressional, Statewide, and State Legislative races. And nationally,  AFL-CIO President Richard Trumka (who also provided an eloquent statement on the defeat of Wisconsin Gov. Scott Walker) reported that a total of 743 union members were elected to public office.

Thank you to everyone who made calls, texted, knocked on doors, wrote postcards, did (unglamorous but important) data-entry work, and more! Now it's time to stay alert and make sure our newly-elected and re-elected officials remain accountable and unwavering in their support for workers' rights and the dignity of working families across our nation. (Read the AFL-CIO's full statement on the midterms here.)

Pictured: Just some of the dozens of union members, including the Utility Workers Union of America Local 1-2, New York State Nurses Association, DC1707, Laborers Local 79, and CWA 1180 who partnered with the NYC Central Labor Council to make thousands of calls to fellow unionists in competitive districts in the weeks before Election Day. We already miss having you in the office!