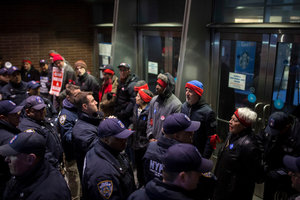 Nearly 20 union leaders were arrested and hundreds of faculty, staff and students demonstrated in the wintry cold Dec. 10 to demand full funding for the City University of New York. They are insisting on a budget that ensures high-quality education for CUNY students, faculty salaries that are competitive with those at comparable institutions, and raises for adjunct faculty who are currently paid at a poverty level.

The protest, led by the Professional Staff Congress, CUNY’s faculty-staff union, was held outside the CUNY board of trustees meeting, where trustees were late in working out their budget proposal for the state. PSC is urging trustees to “stop defending austerity” and instead demand full funding for CUNY, which serves an extremely diverse group of students and has been a gateway to the middle class for countless low-income families. The union is also pressing for a contract; it has been without one for a year, and CUNY has still not made an economic offer.

“Faculty salaries are thousands of dollars below those at comparable institutions, adjuncts receive poverty-level pay, college libraries are cutting hours, and the students are being asked to pay higher and higher tuition,” said PSC President Barbara Bowen, who is an AFT vice president. “It’s time for the CUNY board to … start demanding the funding CUNY needs.” Read more here.