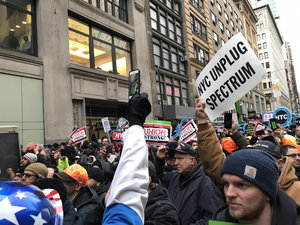 After weeks of productive negotiations, Spectrum last Friday abruptly cut off talks with Local Union No. 3 IBEW and slammed the door on 1,800 workers who have been on strike since March 2017. In response, the union announced the launch of a multi-pronged campaign, with support from both private and public sector unions as well as Governor Andrew Cuomo and elected officials, to fight back against Spectrum’s callous, anti-worker actions.

IBEW Local 3 is re-launching a picket line outside of Charter Spectrum's New York Headquarters and Spectrum News NY1’s television studios at Chelsea Market in Manhattan to protest the corporation’s refusal to offer workers fair wages and benefits. On Wednesday, Governor Cuomo, along with elected officials and labor leaders from across the state, joined the striking workers' for a massive rally outside Charter Spectrum headquarters.

In addition, Local Union No. 3 is launching a digital campaign backed by a significant media buy to support the boycott pledge and encourage customers to drop Spectrum in favor of other service providers. The campaign will inform millions of customers in New York State about Spectrum Charter's anti-worker actions and provide information about alternative service providers in their area.

Read more here, check out video from Wednesday's rally here, and find out how you can #CutTheCord on Spectrum here!