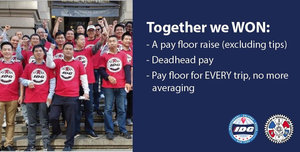 After a two year worker-led campaign by the Independent Drivers Guild, New York City officials voted Tuesday morning to set the nation’s first minimum pay rate for app-based drivers. The rate is set at $17.22 per hour after expenses ($26.51 per hour gross), which the city Taxi and Limousine Commission calculated as the contractor equivalent of New York City’s employee minimum wage of $15 per hour (effective 12/31/18). The rules come in response to a massive campaign by the IDG including a petition signed by 16,000 drivers and many months of rallies, research, and lobby days as well as thousands of calls and letters to city officials. The pay rules will go into effect in 30 days and will bring desperately needed relief to more than 70,000 working families who are struggling to get by on the current pay rate of $11.90 per hour after expenses. The new pay floor will raise driver pay by over $9,600 per year, according to the commission’s analysis.

The Independent Drivers Guild, an affiliate of the Machinists Union, represents and advocates for more than 70,000 professional drivers for apps like Uber, Lyft, Via and Juno in New York City. Nearly 90 percent of IDG members drive for apps as their main source of income and nine in ten drivers are immigrants.

“Today we brought desperately needed relief to 80,000 working families. All workers deserve the protection of a fair, livable wage and we are proud to be setting the new bar for contractor workers’ rights in America,” said Jim Conigliaro, Jr., founder of the Independent Drivers Guild. “We are thankful to the Mayor, Commissioner Joshi and the Taxi and Limousine Commission, City Council Member Brad Lander and all of the city officials who listened to and stood up for drivers.” Read more here!