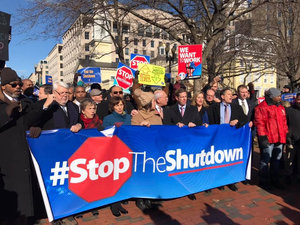 Unions representing thousands of federal workers came together in DC yesterday to rally and march in protest of the continuing shutdown and resulting furloughs that are financially hurting 800,000 employees and families. The rally began at AFL-CIO headquarters in Washington, D.C. and continued with a  march to the White House after remarks by keynote speakers including furloughed federal employees, union leaders, and members of Congress.

“If this shutdown continues to Saturday it will be our largest shutdown in history," said AFL-CIO President Richard Trumka. "And this isn’t a record that anyone should be proud of, let’s call this shutdown what it is: It’s a Lockout. And this has to end NOW!”

Failing to fund the government even for a day has real-world consequences. The 2013 shutdown lasted 16 days, cost American taxpayers $24 billion, and caused valuable work to grind to a halt. Hundreds of cancer patients, for example, were prevented from enrolling in NIH clinical trials. 6,300 children were denied access to Head Start programs for up to 9 days. 1,200 EPA site inspections were canceled. 1,400 OSHA inspections to prevent workplace fatalities and injuries were stopped. Read more from the American Federation of Government Employees here, check out photos from yesterday's rally on Twitter using the hashtag #StopTheShutdown, and watch video of the event on the AFL-CIO's Facebook page.