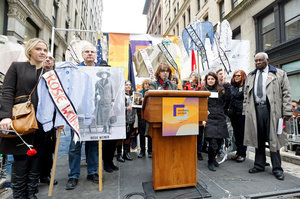 On Monday, hundreds joined Workers United/SEIU (ILGWU) for the commemoration of the 108th anniversary of the 1911 Triangle Factory Fire, a pivotal event in US history and a turning point in labor’s struggle to achieve fair wages, dignity at work and safe working conditions. Outrage at the deaths of 146 mostly young, female immigrants inspired the union movement and helped to institute worker protections and fire safety laws. Rep. Jerry Nadler, Comptroller Scott Stringer, Manhattan BP Gale Brewer, NYS Labor Commissioner Roberta Reardon, NYC CLC, Uniformed Firefighters Association, United Federation of Teachers, Rural and Migrant Ministry, Remember the Triangle Fire Coalition, Workmen’s Circle, the FDNY, clergy, and family members of victims read the names of workers who perished during the blaze and laid flowers at the site of the fire while a bell tolled. In a solemn moment, FDNY Ladder #20 was raised to the 6th floor of the building, the highest point it could reach in 1911, although the fire engulfed the 8th, 9th, and 10th floors. Click here for more photos of this moving and important event, and click here to watch the ceremony in its entirety.

In January, the New York City Landmarks Preservation Commission voted unanimously to approve a memorial dedicated to the victims of the fire. Reframing the Sky, designed by architects Uri Wegman and Richard Joon Yoo, will debut next year if supporters can raise $850,000 to cover long-term maintenance costs. Visit Remember the Triangle Fire Coalition's website to learn how you can help build the memorial.