1199SEIU Rallies to Save Healthcare Funding 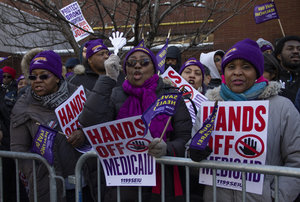 In response to Federal tax cuts for the wealthy, which have resulted in a proposed $550 million ($1.1 billion with Federal matching funds) cut in State healthcare funding, 1199SEIU held a series of “Stop the Cuts” community rallies statewide last week. The week opened with a rally at Montefiore’s Moses Campus, followed by local rallies at New York Presbyterian’s Columbia University Medical Center, Brookdale Hospital, and North Shore-LIJ Health System. Members showed up to send a clear message to Albany that they are willing to fight to protect their jobs, their patients, and access to local care for New York State’s most vulnerable children and seniors.

On Tuesday, March 19th, thousands of members will head to Albany to take their message straight to the Capitol. The outdoor rally will include a 1PM Twitter rally, using the hashtags #StopTheCuts and #SaveOurHealthcare, to make sure the workers’ passion is also felt via social media. Please take a moment to follow them on Twitter at @1199SEIU, and be sure to join in Tuesday’s Twitter rally.