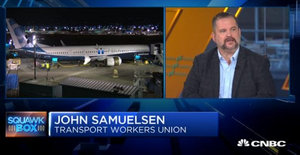 Air travelers and airline workers won an important fight for aviation safety this week after the Transport Workers Union led the charge, calling for Boeing 737 Max 8 airplanes to be grounded until the cause of the weekend crash in Ethiopia is determined.

“It is absolutely absurd that the FAA won’t ground the flights until at least they get the voice and data recordings back from this latest incident,” TWU International President John Samuelsen said on CNBC on Tuesday. “The FAA has to make a decision about whether they want to keep kowtowing to the airline industry,” he said. “It’s all about profits. The FAA needs to realize they work for the American people and they look after the safety of the American people.”

On Wednesday afternoon, after days of mounting pressure, U.S. aviation authorities said they were grounding the planes after newly available satellite-tracking data suggested similarities between Sunday’s crash in Ethiopia and one involving a Boeing 737 Max 8 in Indonesia in October. But yesterday, in the NY Daily News, Samuelson wrote that the FAA turning a blind eye to the dangers of the Boeing 737 Max 8 is just the tip of the iceberg regarding their record on safety—click here to read the Op-Ed.