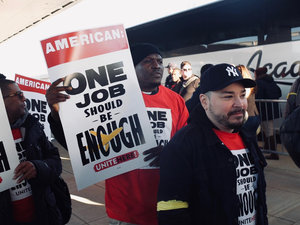 Hundreds were arrested and thousands more demonstrated at airports nationwide on one of the busiest travel days in the U.S.—the Tuesday before Thanksgiving. The protests were led by airline catering workers who provide inflight food and beverage services for all major U.S. airlines, including American Airlines. Through marches, pickets, sit-downs and die-ins, workers called on American to take urgent and necessary steps to ensure that workers who cater its flights are able to escape poverty and access healthcare. Protests took place in 16 cities from coast to coast, with some key Delta and United hubs also targeted. Here in NYC (JFK) as well as in Dallas, Los Angeles, Miami, Philadelphia, San Francisco, ad Washington, D.C., workers and supporters were arrested for their acts of nonviolent civil disobedience.

“We’re out here protesting across the country because we’re sick and tired of being the lowest-paid and worst-treated workers in the airline industry,” said Nadia Small, who has worked catering flights out of JFK—a hub for both American and Delta—for the past six years, “If this Thanksgiving is hard for travelers, think about our hardship. It’s life and death. Many of us don’t have any health insurance, or we take an expensive, low-quality plan that leaves us struggling with medical debt. We can’t pay our bills. One job should be enough for me and my coworkers, just like it’s enough for most other workers in this billion-dollar airline industry.” Read more here, and watch video of the demonstration at JFK here.