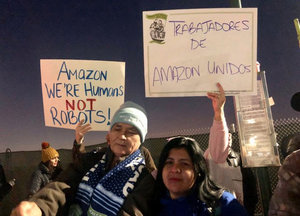 On Monday, at the Amazon fulfillment center on Staten Island, hundreds of fed-up Amazon workers went public with their protest of inhumane job conditions, and demands that the online retail giant increase break time and provide free Metrocards for public buses. Worker leaders delivered a petition signed by over 600 workers to management. The action was a major moment of escalation for Amazon fulfillment center workers on Staten Island during the height of the holiday shopping season. Workers are increasingly organizing and agitating to improve their jobs and calling on the online retail giant to treat its workers as humans, and deliver dignity and respect.

At the event, Amazon workers described being forced to fulfill online orders at a rate designed for robots, not humans, and work brutal shifts often lasting between 10 and 12 hours. A shocking new analysis of Amazon's own data shows that the fulfillment center on Staten Island is more dangerous - by a wide margin - than other notoriously hazardous sectors like coal mining, waste collection, and nursing home employment. Amazon workers experience severe injuries that require them to miss an average of nearly 64 days of work annually for recovery for each injury. Leaked company documents reveal that injury rates at the warehouse, known as JFK8, are over three times the industry average. Read more here!