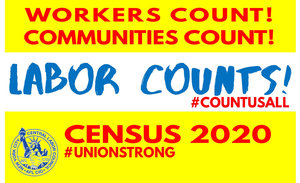 Mayor Bill de Blasio, City Council Speaker Corey Johnson, and The City University of New York (CUNY) Chancellor Félix V. Matos Rodríguez announced this week the more than 150 awardees of the $19 million NYC Complete Count Fund, the City's first-ever community awards program focused on census-related education and organizing. This joint investment by the de Blasio Administration and City Council represents the lion's share of the City's total $40 million going towards census-related mobilization — the largest investment by any city nationwide, and larger than those made by most states.

Among the awardees is the Consortium for Worker Education (CWE), a community training and direct service partner of the NYC CLC and member of the Labor Counts! Census 2020 Complete Count Committee. CWE will use its $250,000 in funding to educate and inform target populations, delivering over 1500 classes and close to 900 workshops from January through June 2020. Read more about the grants here!