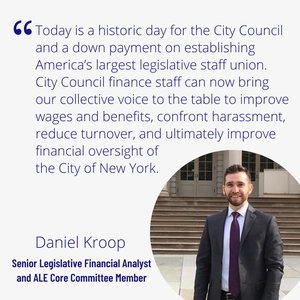 The first sector of New York City Council staffers have been voluntarily recognized as a union, making it the first legislative staff union in the state. City Council Speaker Corey Johnson recognized 23 financial analysts as a part of the newly formed Association of Legislative Employees (ALE) earlier this month, with the public announcement made yesterday. The recognition comes following at least two years of organizing by council staffers.

About 400 staffers requested that Johnson recognize the union back in January. Most of those employees, the Council's aides, have not been formerly recognized as union members yet, but the union says it expects Johnson's support to continue. The two titles recognized this month are central staffers who work as legislative financial analysts and senior legislative financial analysts.

"We are proud to serve the people of New York City and join the ranks of other unionized City employees," said Monica Pepple, a legislative financial analyst and core committee member with ALE. "We look forward to collaborating with the Speaker and the Council to ensure voluntary recognition for Councilmanic Aides next." Read more here.