Nurses Strike for Two Days at Montefiore New Rochelle; Some Locked Out On Return 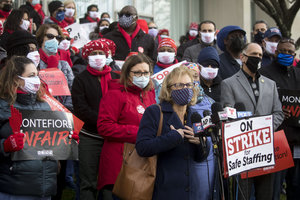 Approximately 200 nurses at Montefiore New Rochelle hospital participated in an Unfair Labor Practice strike this week, demanding safe staffing and a voice in patient care. They were joined by elected officials, labor and community supporters, who urged Montefiore to come back to the bargaining table and negotiate a fair contract.

Emergency room nurse Maria Castillo, RN, said: “What has Montefiore done since June? They put a bunch of billboards up on the highway. They bought TV commercials calling us "heroes." They want the community to think they appreciate us. The reality is, they would rather spend millions of dollars on their public image, instead of making sure we have enough nurses to care for everyone who is sick!”

Negotiations with the hospital stalled when the hospital refused to negotiate on the nurses’ top demand—hiring more nurses and improving safe staffing enforcement to ensure quality patient care. The hospital also attempted to silence RNs from communicating with fellow RNs and restrict RNs’ ability to use social media.

On Thursday, nurses, with the support of elected and community leaders, walked back into the hospital at the main entrance to start their scheduled shifts at 7 a.m. Several nurses who were on the schedule to work were called the night before and told not to come in, locking them out. Read more about the lockout here, more about the strike here, and follow NYSNA on Twitter and Facebook for updates!