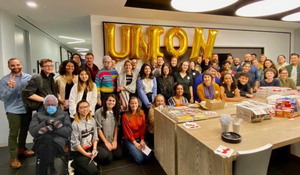 Yesterday, the editorial employees of The New Yorker Union engaged in a 24-hour work stoppage to demand fair wages and an equitable salary structure and to protest Condé Nast and The New Yorker management’s ongoing failure to bargain in good faith and their offensive and unacceptable response to the Guild’s initial wage proposal. Between 6 a.m. yesterday and 6 a.m. this morning, workers did not participate in the production of or promotion of material for both the print magazine and The New Yorker’s digital platform.

In November 2020, the Guild presented Condé management with a wage proposal that would foster equity within The New Yorker and remedy decades of low and stagnant pay across the editorial staff. This week, The New Yorker Union released an internal pay study showing significant pay gaps between men and women—and particularly for women of color, who earn on average about $7,000 less than their male counterparts. The report also confirmed that wage stagnation and lack of opportunity have affected many employees at the magazine; some of the longest-serving workers at The New Yorker are the most underpaid. While this report has been shared with the company, Condé management refuses to seek collaborative solutions or seemingly address the issue at all.

“Simply, we deserve better,” said Natalie Meade, unit chair of The New Yorker Union. “For over two years, we have come to the table in good faith to collaboratively build a workplace that treats our staff with respect and commits to equity for all in The New Yorker. Yet management consistently opts to devalue our work and our workers. We deserve an equitable pay structure and to close the pay gaps that exist in our workplace. We shouldn’t have to demand it.” Read more in The New York Times, click here to read a statement from the New Yorker Union, and follow the union's fight on Twitter!