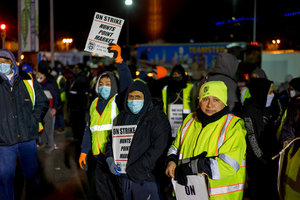 Teamsters Local 202 has been on strike at Hunts Point Market since Saturday, January 16th, to win a fair wage for the essential workers who feed New York. The 1400 warehouse workers and truck drivers handle the majority of fruit and vegetables that are delivered to grocery stores and restaurants in the city. They worked every day through the pandemic, but instead of meeting their demand for a $1 per hour raise, management told them they were replaceable. Five union members were arrested on the picket line while peacefully protesting Monday night, Martin Luther King Day.

"It's not good enough just to clap for them, and say they're essential," Teamsters Local 202 President Daniel Kane told CBS in an interview. "When they asked for a decent raise, a fair number, they should be told, 'Yes, you can have that, and thank you."
Teamsters Local 202 asks all supporters to join them on the picket line at 772 Edgewater Road, Bronx, NY. The picket line is running 24 hours a day. And click here to follow the workers' fight on Twitter!