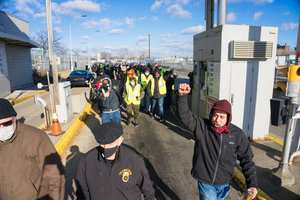 After a one-week strike, 1,400 Hunts Point Produce Market workers are back on the job with historic raises. Teamsters Local 202 members approved their new union contract on Saturday.

The essential workers who have stayed on the job throughout the pandemic supplying New York grocery stores and restaurants went on strike after management refused to offer them more than a 32-cent raise. The strike garnered widespread support from elected officials and community members. The Teamsters thank the New York City labor movement for bolstering their strike line and standing with them through this fight.