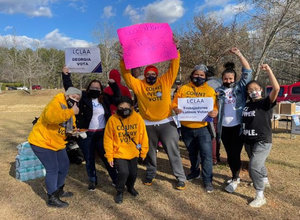 This week, working families across our city and nation were witness to one of the darkest days in our history, as a violent mob stormed the Capitol in an effort to overturn a free and fair election and prevent a peaceful and Constitutional transfer of power. Freedom of speech is one of our most fundamental principles, and every American has the right to protest and to make their voices heard. But that's not what this was.

Wednesday's events, instigated by Donald Trump and his enablers, constituted an unprecedented attack on our democracy from within our own borders. Not only were our members of Congress and their staffs threatened, so was the safety of the thousands of hard working men and women who keep our Capitol running. All Americans must come together to not only condemn these attacks, but to hold accountable those within our own government who poured fuel on the fire by spreading lies and inciting their followers to politically motivated violence.

Despite the efforts of those who would use force to defy the will of the American voters, Congress fulfilled its Constitutional obligation and certified the election of Joe Biden and Kamala Harris as our next President and Vice-President. And on that same day, working people secured another historic victory, with AFL-CIO endorsed candidates Rev. Raphael Warnock and Jon Ossoff winning their Senate races in Georgia. The wins will give Democrats control of the Senate, with New York's own Senator Chuck Schumer poised to become the next Majority Leader. And as a result, we'll have a pro-labor majority and a chance at getting the real labor law reform and COVID-19 relief we’ve been fighting for.

And NYC union members helped make it happen! Over the past few months, in partnership with our colleagues at the Georgia AFL-CIO, our affiliate members have made more than 10,000 calls to union households in Georgia. And in the days leading up to the election, members headed south to help in person, visiting and handing out PPE/GOTV information to over 500 workers at the chicken factories in Gainesville alongside GA Familias Unidas, knocking on doors with Poder LatinX, and opening/closing polls in Gwinnett County. They also participated in a voter engagement and volunteer meet-up with Taco Sublime from Chicago sponsored by National LCLAA. (Pictured above: Bronxites Ivonne Rodriguez, UFT Retiree and Jose Vargas, LCLAA Executive Director and UFT member with other union members on the ground in GA). The AFL-CIO has released a video highlighting workers in Georgia who delivered this victory for all of us — watch it here.