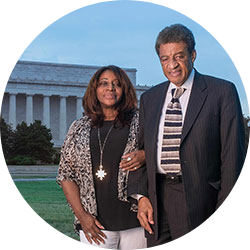 Few civil rights leaders have had a greater impact on the labor movement than Velma and Norman Hill. While they were youth leaders of the NAACP chapter in Chicago in 1960, the Hills led a “wade-in” protest at a segregated White-only beach. Velma was badly injured by a group of beach-goers who hurled rocks and bricks at the Hills and the other Black people who had peacefully gathered to enjoy the beach. The Hills went on to become active leaders of the labor movement. In 1969, Velma Hill founded the New York City school district paraprofessionals’ chapter of United Federation Teachers/AFT Local 2, facing down racism and anti-union bigotry in the process. Norman Hill went on to become president of the A. Philip Randolph Institute. “Having been grossly oppressed as slaves, sharecroppers and agricultural laborers, and industrial workers, unions have given African Americans the opportunity to work as truly free men and women,” Norman Hill said.

Founded in 1965, the A. Philip Randolph Institute (APRI) named after its founder, began as national organization of black trade unionists.