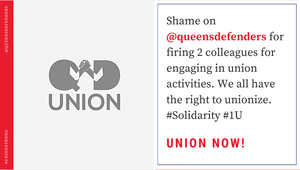 Staff at Queens Defenders learned this week of the summary firing of two colleagues in apparent retaliation for their union activities. Queens Defenders Executive Director Lori Zeno terminated both employees in the midst of a union drive at the organization as employees were returning union election ballots to the National Labor Relations Board. QD attorneys and social workers regard this action as an illegal and immoral attempt to intimidate employees against organizing and forming a union.

These firings represent a continued escalation of heavy-handed union-busting activity on the part of Ms. Zeno. In December, QD attorneys and social workers announced that 90% of them had signed cards to unionize with the Association of Legal Aid Attorneys/UAW Local 2325. Ms. Zeno and QD management refused to voluntarily recognize the union, instead forcing an election and resorting to increasingly brazen intimidation tactics in an effort to dissuade would-be union members. Ms. Zeno held a captive audience meeting that ran over two hours long; sent out misleading, offensive and intimidating anti-union emails; and instructed management to make phone calls to employees on a near-daily basis frequently implying that a union would threaten staff job security and the organization’s contract with the city.

Click here to take action by emailing Lori Zeno to demand she reinstate these workers with full back-pay, respect the unionization process and the law, and cease all forms of retaliation against her staff! A press conference with elected officials is being planned for next week, follow @alaa2325 and @qdunion for updates.