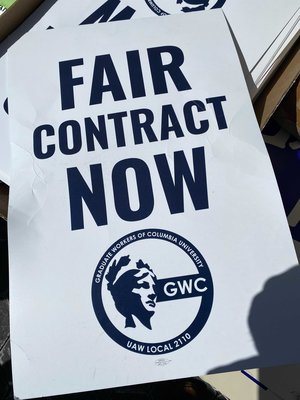 With masks on and drums beating, student-workers formed a picket line on Monday at 116th Street and Broadway and along College Walk to mark the first day of their strike. The in-person demonstration was only a fraction of the strike, as the over 3,000 members of Graduate Workers of Columbia-United Auto Workers—some of whom are dispersed because of the pandemic—also sent communication blasts and shut down Zoom classes worldwide.

This moment is the culmination of two years of unsuccessful negotiations with Columbia for the union’s first labor contract. The strike will continue indefinitely until the University and GWC-UAW bargaining committee reach an agreement on the seven open articles still remaining.“For the things that arguably don’t cost the University money, when they deny us those demands, they deny us dignity, and for the economic asks, they deny us literally the material conditions we need to live a livable life in New York City,” GWC-UAW bargaining committee member Steven Lazickas said. “They pay us starvation wages, so they’re denying us a healthy life and they’re denying us dignity. And that’s why we’re going on strike.” Read more in the Columbia Spectator, follow GWC-UAW on Facebook and Twitter, and visit the union's website to sign up for in-person picketing, digital picketing, donate to the Hardship Fund, and send a letter to the Columbia Administration.