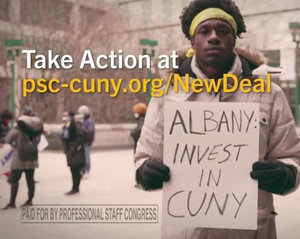 This week, ahead of the release of the Assembly and Senate one-house budget bills, the Professional Staff Congress, the union representing 30,000 CUNY faculty and staff, launched an ad campaign calling on state legislators to increase funding for CUNY and pass New Deal for CUNY legislation.

The resource-starved City University of New York system needs an increase of $273.6 million in this year’s state budget, according to the union. The funding would restore cuts proposed in the Governor’s Executive Budget, close the TAP Gap and fund the first year of the New Deal for CUNY.

Introduced last month by Senator Andrew Gounardes and Assemblymember Karines Reyes, the New Deal for CUNY bill would mandate free tuition at CUNY. Over five years it would phase-in minimum staff-to-student ratios for mental health counselors, academic advisors and full-time faculty, aligning CUNY with national standards for students’ well-being and success. The bill is racking up sponsors and gaining momentum. It now has 17 co-sponsors in the NYS Senate and 33 in the Assembly. Watch the video here!

A New Deal for CUNY