Fortune Magazine Union Members File Board Charges and Walk Out 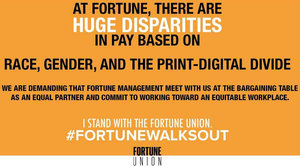 On Tuesday, the editorial employees comprising the Fortune Union walked off the job for one day to hold an informal press conference and rally to expose management's bad-faith in negotiations with the NewsGuild of New York, the worker’s bargaining representative, and to demand a fair, equitable contract. As a result of management’s egregious behavior, the Fortune Union has filed six Labor Board charges against management. The Fortune Union has been at the bargaining table with Fortune management for nearly a year and half, with little movement toward a fair contract. In addition to ignoring contract language the union has presented, the company has encouraged an environment of silence on pay, telling union members to keep their salaries secret. This has created a significant wage disparity, in which women make 84% of what men in the unit do on average, and workers of color make 78% what their white colleagues do. Read more here, watch the rally here, follow the Fortune Union on Twitter here, and check out additional coverage in Business Insider, Poynter, and The Hill.