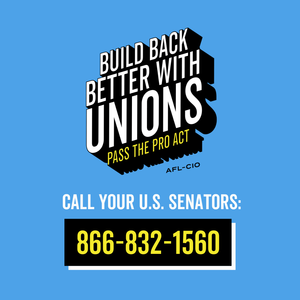 The House of Representatives on Tuesday passed the Protecting the Right to Organize (PRO) Act, legislation which will make it possible for tens of millions of workers to exercise our freedom to freely and fairly form a union and bargain together. The PRO Act is landmark worker empowerment, civil rights and economic stimulus legislation. It will make union elections fairer by prohibiting employers from forcing workers to attend "captive audience" meetings, where employers issue veiled threats and present anti-union propaganda to pressure workers to vote against the union.

Rep. Nicole Malliotakis was the only member of New York's City's Congressional delegation to vote NO. All of NYC's other Congressmembers voted in support of working people and unions.

The national AFL-CIO's Executive Council, in a statement released Wednesday, said, "To those who would oppose, delay or derail this legislation—do not ask the labor movement for a dollar or a door knock. We won’t be coming. No candidate for Congress or the White House should expect the support of the labor movement if they are not prepared to stand with workers in our fight for justice by endorsing, co-sponsoring and voting for labor law reform."

The PRO Act now moves to the Senate. Both of New York's Senators are supporters, but we can all ask family and friends in other states—especially Arizona, Maine, Virginia, and West Virginia—to call their Senators and ask for their support!