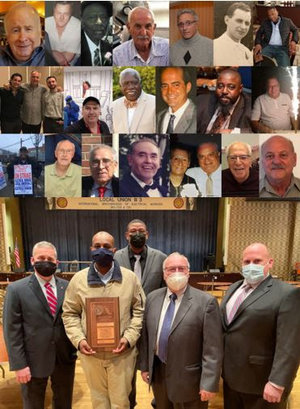 In recognition of the one-year mark of the COVID-19 pandemic, IBEW Local 3 has added a Memorial page to their website with the names and photos of Local 3 members who have been lost so far. The photos were also the centerfold of Local 3's February 2021 Union World newspaper. Family members who would like to submit a photo of a member currently missing from the memorial can do so by emailing dhinton@local3ibew.org.

At the union's General Membership meeting last week, 1st-year apprentice Devon Brummell received the Life Saving Award—the highest honor bestowed by the International Brotherhood of Electrical Workers—in recognition of his heroic actions on the job. While working for Allan Briteway Electrical Contractors at the Turkish embassy in Manhattan on November 2, 2020, Devon saved a Local 3 brother who started choking during their midday lunch break. Devon intervened immediately and, standing behind his co-worker, he applied pressure on his chest. The incident occurred on the same day Devon received his union card. “I would've done it for any brother or sister,” Devon said.