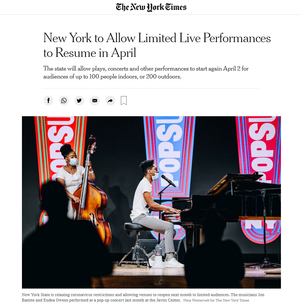 Local 802 applauded this week’s decision by Governor Cuomo to allow a limited reopening of live performances in New York starting on April 2. Local 802 President Adam Krauthamer told the press, "This landmark announcement was been a long time coming and we need it now more than ever. All along, we’ve urged the state to open the arts as safely and as expeditiously as possible in order to give audiences and tourists what they crave: the world’s best live music and art, presented in a safe and responsible format, to make our city’s recovery a reality." Read the full statement here.

Also this week, Local 802 added its voice to condemn the recent increase in violence towards Asian-Americans as reported in the New York Times and elsewhere. Local 802 released a statement that said "Hate and intolerance is not acceptable anywhere, including our neighborhoods, our orchestras, or our union. Local 802 stands with our Asian-American members and pledges to be a safe and strong community for all of our musicians. We want our members to feel safe: incidents of violence can always be reported to law enforcement, and other incidents of intolerance or bullying can be reported anonymously via the Local 802 Harassment, Bullying, Discrimination, and Emergency Response and Reporting Procedure."

Finally, Local 802 celebrated two of its members in the media: Jon Batiste, who won best original score at the Golden Globes, and Zsaz Rutkowski, who was featured in Local 802's union magazine Allegro for her article on the "singing bowl." Catch up on more news on Local 802 in this month's issue of Allegro.