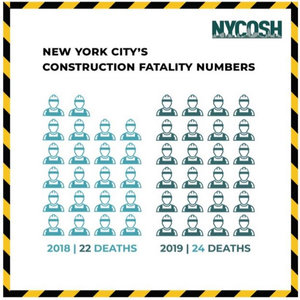 In general, working conditions across industries are much more dangerous for Latinx workers. While an estimated 10% of New York State’s workers are Latinx, in 2019, 20.5% of workers who died on the job were Latinx.

“Construction workers put their lives on the line every day to build our homes, hospitals, schools and offices. Seeing a trend of rising fatalities in New York City is particularly alarming, and it’s time lawmakers commit to defending and expanding safety rules and regulations to ensure that bad actors are held accountable and workers can return home to their families at the end of the shift,” said Charlene Obernauer, NYCOSH Executive Director. Read more here and find coverage in the Daily News here.