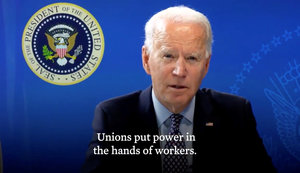 On Sunday, President Biden made perhaps the strongest public statement in support of the right of workers to organize that any American President has made in memory, denouncing employer intimidation and anti-union propaganda and affirming that unions level the playing field and lift up all workers, both union and non-union. Not only that, the President pointed out what many often forget: that the National Labor Relations Act doesn't just say that unions should be allowed to exist, but that unions should be encouraged. It's an important message not just for workers in Alabama who are organizing to make Amazon a better and safer place to work, but for all workers across New York City and across the nation who are coming together to demand their right to a voice in the workplace. Watch the full video here, and click here to watch the Amazon workers' response!