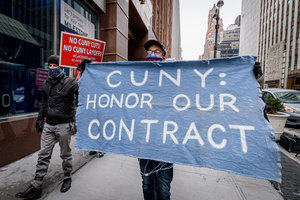 PSC members fought back fast and hard because they were offended that Matos Rodríguez would attack lower-paid employees and withhold raises explicitly bargained to address inequities of race and gender. And they came together from every part of the union because they were stunned that management thought it could shred a union contract with impunity—and without even bothering to notify the affected workers! They fought back and they won.

Late last Friday night, hours before a planned demonstration in front of CUNY Chancellor Matos Rodríguez’s house, the chancellor reversed his decision. He signed an agreement with the union for payment of the increases. Assistants to HEO and faculty in full-time Lecturer titles will receive this year’s full equity increase as a lump-sum payment.

It should not have taken a protest at CUNY central, thousands of email messages to management, petitions, a letter to the chancellor signed by city labor leaders, and a plan to demonstrate on the chancellor’s doorstep just to get CUNY to adhere to the contract and pay the equity raises. But the restoration of the equity raises was more than a defensive victory: it was proof that the PSC is prepared to fight until they win. Learn more.